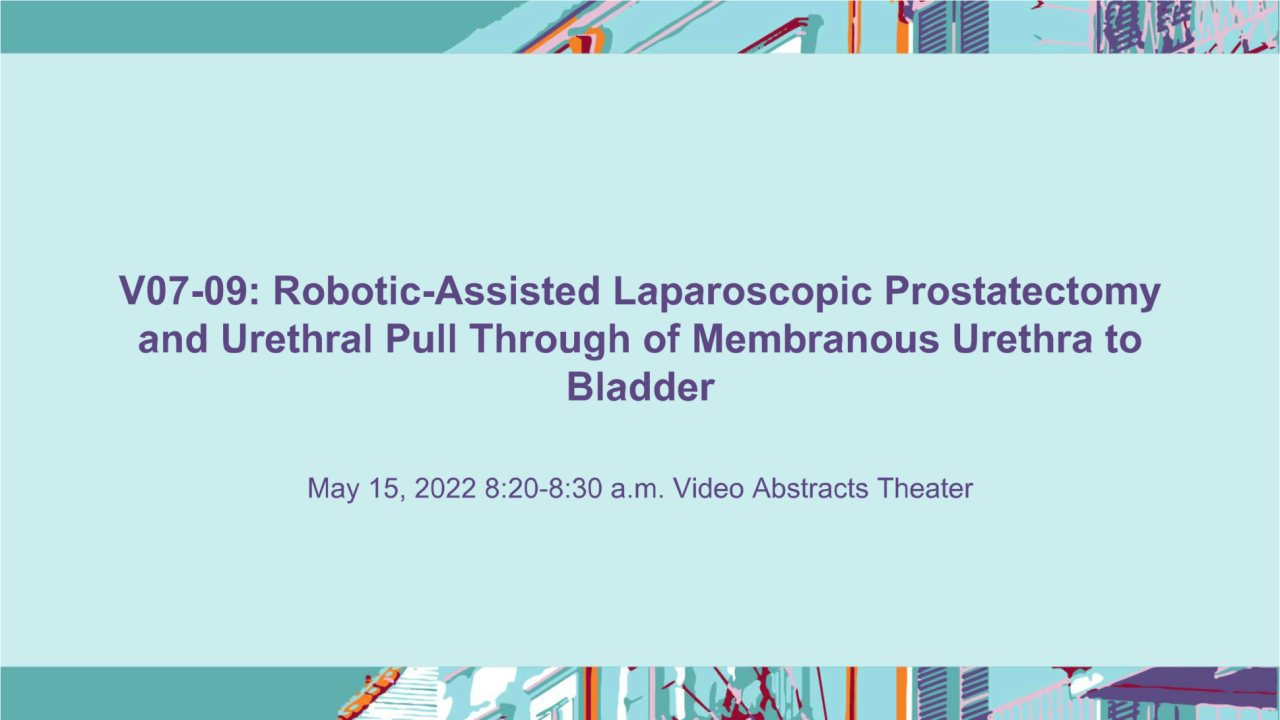 V07-09: Robotic-Assisted Laparoscopic Prostatectomy and Urethral Pull Through of Membranous Urethra to Bladder


Introduction: While robotic assisted laparoscopic prostatectomy has been a durable treatment option for men with localized prostate cancer over the past two decades, salvage prostatectomies are performed less frequently. In this video, we report a unique case of a salvage prostatectomy and membraneous urethra pull-through in an individual who was treated with both high-intensity focused ultrasound and external beam radiation therapy complicated by prostate cancer recurrence and a severe bulbar urethral stricture that failed direct visual internal urethrotomy.

Methods: The case presents a 71-year-old male with a urological history of prostate cancer in 2010 treated with HIFU. Following biochemical recurrence in 2013 he subsequently underwent salvage EBRT. This was complicated by a severe bulbar urethral stricture necessitating two DVIUs In addition, the patient underwent transurethral resection of the prostate for obstructed voiding symptoms and placement of an inflatable penile prosthesis.\n\nFrom a cancer standpoint, his PSA slowly rose after EBRT from 1.3 in 2019 to 2.7 in 2021. Repeat prostate biopsy showed 1/14 cores positive for Gleason Score 4 + 4 = 8 prostate cancer. The patient proceeed with a robotic-assisted laparoscopic prostatectomy with a urethral pull through and bilateral pelvic lymph node dissection. \n\nThe video begins with dissection of the prostatic apex to entirely free up and remove the prostate. Once the prostate is separated from the urethra, the dissection continues until the old bulbar urethral scar is completely removed. After we ensure the remnant urethra is free of scar and patent, the urethra is seen being passed through from below into the pelvic cavity and the anastomosis is performed. We then proceeded with a bilateral pelvic lymphadenectomy using the synchroseal device which obviates the need for any clips. The patient’s inflatable prosthesis reservoir makes the right side more challenging, however, it is feasible with careful dissection.

Conclusions: This case discusses the surgical technique used in a salvage robotic-assisted prostatectomy with membranous urethral pull-through in a patient with previous history of HIFU, salvage EBRT, bulbar urethral stricture, and inflatable penile prosthesis. In this video, we show this is a feasible option in select men and may spare them the burden from undergoing a radical cystoprostatectomy.